The Paso Doble is a dance that was modeled after the drama of a Spanish bullfight. 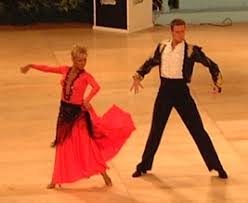 The Paso Doble is a very theatrical Spanish dance. In a normal dance, the man portrays a matador from a bullfight and the lady acts as the cape from the bullfight. There are other roles that dancers can chose to enact. They are the role of the torero, picador, banderillero, bull or Spanish dancer. The Paso Doble is an arrogant and passionate dance all at the same time. This dance is normally performed in competition style instead of a social dance.

This is one of the most dramatic dances of all the Latin dances. Dancers take strong steps forward with the heel and incorporate artistic hand movements. The forward steps are meant to be strong and proud. The men do moves that require strong stomps of their feet, much like a matador does to get the attention of the bull. All the moves done in the dance are sharp and quick, while the chest and head are held high to show respect and dignity.

In Spanish “Paso Doble” means two steps, referring to the marching matter of the steps. During the dance, the dancers make several dramatic poses that go along with the highlights of the music being danced to. Their feet should always be directly underneath the body. There are some distinctive steps to the Paso Doble, which include Sur Place (on the spot), separation, attack, huit, open promenade to open counter promenade, Spanish line, promenade close and flamenco taps.

The music that is normally danced to has strong Flamenco influences. The music is bold and inspiring with very few rhythm changes. The tempo is about 60 beats per minute.

Acting for the Camera